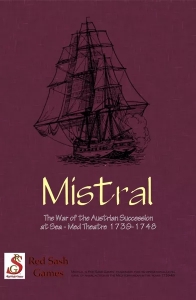 Back in stock soon
Avaibility planned on 30 October 2022

Volume I in the Sea Lords Series

Mistral is a hardcore, naval war game pitting Britain and Spain against each other. It is the first installment of the Sea Lords saga.

Mistral is a naval war game for two players, set during the years 1739-1748. It explores the roles of the navies of Britain, Spain, and France, plus their allies, in the Western Mediterranean. Scale is "operational" - that is, the playing pieces represent squadrons of as many as four ships, rather than individual men of war. Other counters represent leaders (good and bad), "light" forces such as frigates and zebecs, and "formations" that allow you to concentrate your forces.

Tactical themes are eschewed in favour of operational issues: keeping your forces in fighting trim, being at the right place at the right time, & dealing with a mounting list of instructions, orders, and unfilfillable mandates from your Government. Combat, though abstracted, takes into account leadership, the class and condition of your ships, and of course the Weather Gauge.

In an Age of Sail, wind and water conditions are critical, even at the "operational" level. Movement therefore uses a point-to-point system where costs change with the wind and you will often be unable to go where you desire. Actions are "simultaneous", but unlike many naval games, plotting is not required

SIX PLAYER LINK TO QUEEN'S GAMBIT:
Mistral includes rules for linking its Campaign Game to the Lace Wars title, Queens' Gambit; up to 6 players may play this monster. However, Mistral is a complete game in itself.