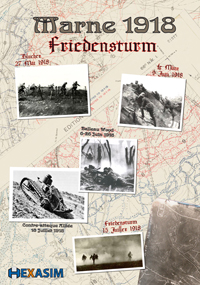 The game covers two months of fighting on the Marne, from the german offensive on May 27th through to the allied counter-offensive at the end of July.

The map, at a scale of 3 km per hex, covers an area from Compiègne to Reims, with Paris - the ultimate objective - in the bottom left-hand corner.
See the map >>

The counters represent the divisions and regiments that took part in the campaign.
See counter details >>

The campaign was characterised by short periods of intense fighting during which the front moved far in a few days interspersed between weeks of relative calm. The game's time-scale recreates this with 3-day turns and a system which adds 2 additional move-and-fight sequences when an offensive is underway.

The game includes 3 scenarios; Blucher, the Matz, and Friedensturm.

The Matz, June 9th 1918. The Germans launch an offensive towards Compiègne. They are rapidly checked by Mangin's 10th army arriving in reinforcement with his numerous tanks. With a small number of counters, this scenario can be played to completion in under 2 hours. It is an ideal introduction to the game-system.

Blucher, May 27th 1918. This scenario covers the initial German offensive. The challenge is tough as the Germans attempt to reach and cross the Marne, 50 km to the south of the original front line on the "Chemin des Dames". The allied player will be hard-pressed to repeat the miracle of the Marne.

Friedensturm, July 15th 1918. This scenario covers the area from Soissons to east of Reims. Lasting 3 turns, it recreates the German "Peace" offensive and the allied counter-attack 3 days later. Both players will thus be simultaneously attacking and defending in different sectors of the front.

The game-system is based on traditional wargame principles, but adds-in all the factors specific to fighting in 1918. Both players will have to manoeuvre their forces while suffering from the same limitations and restrictions as commanders at the time, taking into account the characteristics of World War I battles. The combat resolution system has been the object of particular care.

In Marne 1918 - Friedensturm, each combat is simulated in great detail, integrating a large number of tactical details. Each factor that influenced combat at this level is taken into account; elite troops, stosstruppen, tanks, aircraft, artillery, differing national doctrines, terrain, and fortifications.

A new game concept has also been included: tactical coordination on the battlefield. Will the defender retreat or stand and fight, will he bring up his reserves? Will the attacker exploit his local success with a breakthrough, or will he stay where he is because awaiting further orders? The tactical coordination table will answer all these questions. Players will soon learn that it is these matters that will determine whether a combat is successful or not.

Adding additional rules, the campaign game allows players to simulate the whole of the campaign in the Marne area, from the initial German attack along the Chemin des Dames on May 27th until August 3rd when, the sector having settled down, it became of secondary importance.

The campaign rules add new concepts recreating the specific aspects of the campaign; initiative and offensives, reserves and reinforcements, rail lines, the changes in allied doctrine, and the influence of outside events.

These advanced rules do not make the game more complex, as they are organised in such a way that they can in general be learned as players go along. What's more, a large proportion of the additional rules are directly included in the descriptions of the random events.