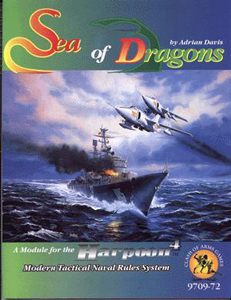 Sea of Dragons is a module for the Harpoon 4 Naval Rules System.

Sea of Dragons concerns conflicts among 16 nations of the Pacific Rim, all of whom have their own agenda and means to try to advance it. The scenario book includes a brief introduction to the political and economic aspirations of the potential belligerents, and is followed by a discussion of their capabilities and military plans for the immediate future. There are 4 scenario sets containing a total of 26 engagements, many of which are suitable for solitaire play. The scenarios can be played individually or as part of a mini-campaign. And just in case 26 scenarios are not enough, a scenario generator for the hotly contested Spratly Islands is also included.

The fleet and air force lists contain all the platforms currently in service plus those expected to come on line over the next few years. Rounding things out is an extensive bibliography and reference section and errata for Harpoon 4 rules and data annex.

The Data Annex contains almost every platform available since 1980 as well as quite a few older ones that are now out of service. The vast majority of the data on the weapons and sensors are new and have previously not been listed in Harpoon 4. This wealth of information will allow the modern naval enthusiast to explore various combinations of systems, much as the nations involved do when preparing threat analysis.