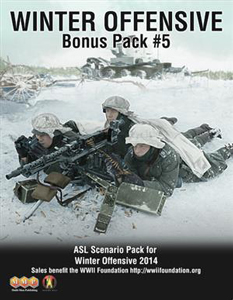 WO12 Heart of Wilderness: Russian attack vs Germans, August 1942. The Germans can set up an extensive fortified zone in a primarily wooded region near Leningrad with pillboxes, trenches, a few Guns, and a bunch of good infantry led by a 10-2. The Russians attack in three waves, intent on Controlling a bridge and grabbing at least one building in a small village on board 67.

WO13 All The Stops: Another Russian attack vs SS Germans, this time in Poland in 1944. The Russians must move down the length of board 67 and win through a combination of terrain Control and Exit. The Russians get three M4/76(a)s, loaded to the gills with Smoke and the awesome Smoke Mortar, while the thin German force, centered around four 6-5-8 squads and three lesser 4-4-7 SS squads and supported by a halftrack and a mortar, try to delay the Russians long enough to reduce the VP value of the buildings, thus forcing the Russians to Exit more VP in order to win. There is a very interesting "semi-random" Russian rolling barrage of 70mm Harassing Fire that can impede both sides. Two StuGs show up later in the game to bolster the defense. This is a rense scenario between two powerful but potentially brittle forces that requires sharp play by both sides to avert disaster.

WO14 For Pride's Sake: This scenario features a Japanese Night attack vs Americans on Luzon in 1945. Good Japanese infantry and 6 tanks try to Exit, while a nasty batch of American firepower — a thin line of infantry backed by a Sherman, three M8 Armored Cars, and a 37LL AT Gun (with CANISTER) — try to plug any gaps and deny the Japanese the escape.

Board 67 is dense mix of woods, brush, orchard, hedge and grain with 2 small hills, a town and two gullies.