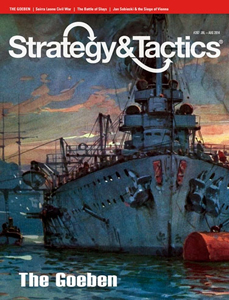 Goeben, 1914 puts you in command of the SMS Goeben, the German battlecruiser that made a historically epic voyage through the Mediterranean during the opening days of World War One. This is a solitaire game in which the player must accomplish a specific “objective” to win the game, which will be generated at random at the start of the scenario. The player must manage the various outfittings and functions of the SMS Goeben and its escorting light cruiser, the SMS Breslau. As you fight your way through the Mediterranean, you will encounter various Allied warships, merchantmen for raiding, and unexpected opportunities and objectives. These are represented by “Incident” chits.

German ships in the game are shown in detail. Allied ships are shown in a more abstract way because you, the player, are seeing the situation from the standpoint of Admiral Souchon, the fleet commander of the German Mediterranean Division. The possibility of running into enemy warships will be increased via the “Alert Level”, which represents how much the Royal Navy’s Admiralty is concentrating its resources against your task force. The game can be played with two players, one in command of the Goeben, the other in command of the Breslau.