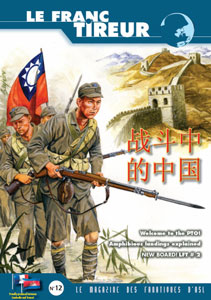 This issue focuses on the PTO, mostly on the war between China and Japan as well as on seaborne assaults. As usual 10 scenarios printed on hard paper and featuring actions with Japanese, Chinese but also US units are included. Moreover, this issue includes 2 SASL missions (on hard paper as well) plus a new map (SK style).

The main topics deal with Seaborne assaults, PTO specificities and some other articles in order to allow any ASL player to enjoy the Pacific Theatre of Operations.