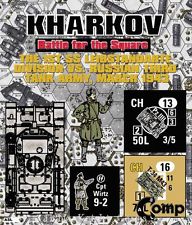 KHARKOV, UKRAINE, 10 March 1943: The SS Forces under Obersturmbannführer Kurt 'Panzer' Meyer led his recon unit to drive through the Russians and form a blocking position in the southeast section of the surrounded city, around the cemetery. General Rybalko ordered his units to block the German units from moving through the city, establishing defense lines along the small river meandering through Kharkov. The local militias were called up to aid in the defense of the city and many were thrown piece meal against the SS units armed with new "wonder" weapons. Those new weapons included the MG 42, whose rate of fire almost doubled over the previous MG 34, from 600-800 rpm to 1100 to 1200 rpm. The German forces would begin to have a new type of problem, an inability to maintain a high enough level of supply of ammunition to take advantage of the high rate of fire of the MG42.

On 12 March, the LSSAH made progress into the center of the city of Kharkov, breaking through hardened enemy defenses in the northern suburbs. What followed was a house-to-house bloodbath as the Germans pressed ever closer to city center. By the end of the day, the division had reached a position just two blocks north of Dzerzhinsky Square. The 2nd Panzergrenadier Regiment's 2nd Battalion was able to surround the square, after taking heavy casualties from Soviet snipers and other defenders, by evening. That night, 2nd Panzergrenadier Regiment's 3rd Battalion, under the command of Joachim Peiper, linked up with the 2nd Battalion in Dzerzhinsky Square and attacked southwards, crossing the Kharkov River and creating a bridgehead, opening the road to Moscow Avenue. Meanwhile, the division's left wing reached the junction of the Volchansk and Chuhuiv exit roads and went on the defensive, fighting off a number of enemy counter-attacks.

KHARKOV: BATTLE FOR THE SQUARE places you in the heart of an urban battlefield with nothing to fight with but elite units on both sides. The counter collection is impressive: ALL THE COMBAT COUNTERS NEEDED TO PLAY ALL OF THE SCENARIOS ... in ALL NEW presentations ... Germans AND Russians in Winter 1943 uniforms. And all AFV counters are 'winterized' to be more evocative than ever. What's more, the battlefield map is also done up in winter colors!

Includes four countersheets and one map