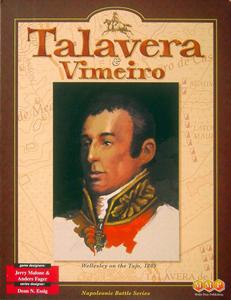 July, 1809. The uneasy alliance of Wellesley's Army of Portugal and Cuesta's Army of Extremadura was being pressed from every direction by the King of Spain, Joseph Bonaparte's, Army.

Forced to make a stand, a two day battle occurred which mauled both sides but allowed the Allies to escape towards Portugal.

Talavera is MMP's newest game in the Napoleonic Brigade Series (NBS) and features the end result of half a decade of brainstorming and intensive playtesting - the 3.0 NBS rules set. It is fast playing. It is furious. And, finally, it is about leading armies. MMP, Dean, and the Honchos think you will enjoy them very much.

Talavera also contains the mini-game on the small, but decisive, 1808 battle of Vimieiro.

Fought outside of Lisbon in August of 1808 between the British and French Armies of Portugal, French General Junot was defeated and surrendered both his army and Portugal to the British - setting the stage for the Peninsula War.