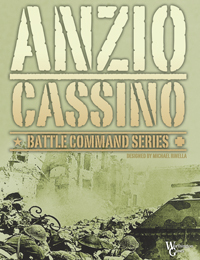 The Battle Command Series are quick playing games with large 7/8? counters, a double sided map board, rules, and dice. Each battle has 4 pages of rules. Units are rated for their strength and movement, as well an endurance rating that reflect how much damage a unit can sustain in combat. Each battle includes 2 scenario’s, one for the complete campaign, and one for a shorter scenario. In Anzio for example you get a scenario starting with Operation Shingle running from January 22 to February 20, 1944. Each turn represents five days of combat, and each hex is about 2 miles across