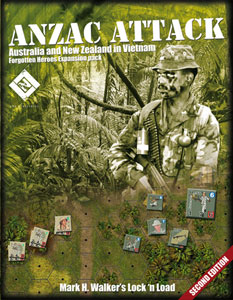 ANZAC Attack is the first expansion for Forgotten Heroes. Whether you’re a fan of the original or a gamer that missed out the first time around, the ANZACs are back.

ANZAC Attack showcases redrawn boards by Marc von Martial, a beautiful scenario layout, and even more counters than the original. Featuring the forces of Australia and New Zealand fighting against the North Vietnamese and Viet Cong, this expansion is completely compatible with Forgotten Heroes 2.

The scenarios detail not only the ANZAC participation in Vietnam, but also NVA armor in the city, and ARVN vs NVA battles.

A Charles S. Roberts award winner, International Gamers Awards Game of the Year, and voted by Game Magazine as one of the top five conflict simulations.