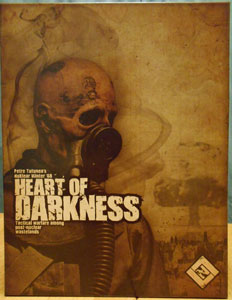 "First there was the white light, and then everything melted away. And then there was silence. The war ended in 1946 with the nuclear annihilation of the Third Reich but all was not lost, for many German units took shelter in underground vaults where they continued to live, train and develop new weapons. The Reich, oblivious of the climatic, technological and political changes inflicted by more than twenty years of nuclear winter, emerged in 1968 under Himmler's guidance only to find the Fatherland, a barren land now known as the Zone, surrounded by the NATO military and populated by mutants and a mysterious army of elusive beings fighting under the sign of the Black Hand.

It is now 1969. A year has passed since the Reich began its struggle, only to have met a stiffer than anticipated resistance from the Black Hand, their war beasts, and the far too powerful NATO force. The German war machine's bold impetus has been bogged down and turned into a fighting withdrawal as men, equipment and food levels have dwindled to critical levels. To make matters worse, a somber cloud looms over the Germans as Himmler, the Reich's ruthless commander, has been bedridden by a peculiar illness. Feeling that his time may be nearing, Himmler decides to reveal that the relic recovered from the Holterberg monastery during the previous year's campaign may represent the vaults' only hope for survival and the answer to Germany's future.

Scholars of the occult-worshiping Arkanum Korps have discovered that the object is actually a map marker, the link to another artifact, a source of unspeakable power amongst the mortals. Mentioned in writings from the Xth century, dating from the birth of the Holy Roman Empire, it is said that the Charred Heart was responsible for the rise and downfall of the great European kingdoms - a true maker of kings. Its trail had been lost sometime during the 1800s, but there may be a glimmer of hope if, according to the Holterberg relic, it were to be found again somewhere in the East and used to restore Germania Magna. Thus, the much feared Arkanum Korps are tasked, once again, to head out for the Magdeburg ruins, far into the unexplored part of the Zone in search of the Charred Heart artifact.

Meanwhile, in a surprising turn of events, for reasons yet unknown, the Black Hand took on the fight to NATO, thus, deliberately or not, saving the Reich from certain doom. Despite the defeat and subsequent disappearance of their Zealot commander holding the Wunderwaffe blueprints in last year’s showdown, seemingly endless swarms of Zealots and Ravagers poured from the crimson woods unto the unsuspecting US and Russian bases, ambushing supply columns and encircling numerous divisions in the war-torn Zone, effectively halting NATO's drive towards the retreating German army.

For NATO there are no options other than to keep going forward. Their political and financial strength can, and must, keep the supply chain intact. Their doctrine dictates that wherever resistance is met, more weight is to be put into the push in order crush the obstacle, and, true to this principle, efforts have been made to increase the power, range and overall effectiveness of all their weapon systems. HADES (Heavy Assault and Demolition Expeditionary Squadron) is the newly assembled formation at the tip of NATO's thrust, closely guided by Russian GRU agents rumored to have psychic powers. Fielding machines and weapons built based on Nikola Tesla's works on the power of electricity and automatons, HADES is already trampling its way to the frontline.

NW68HD introduces the characters, individuals with unique backgrounds and motivations, employing powerful skills, capable to further boost the effectiveness of the platoons they’re attached to. Entering the fray is a new guild of unscrupulous, well equipped and perfectly Zone adapted mercenaries ready to shed blood for those willing to pay the most for their brutal services. Still, nothing compares to the horrific creatures lurking in Magdeburg's radioactive shadows, an army of nightmarish creatures marked with a White Hand emblem nearly identical to the infamous black one. Despite the shock, this encounter with the darkness may very well shed some light on the truth behind the Zealots and their origins.

Each Copy of Heart of Darkness Includes:

A Beautiful Page of 88 Counters

Heart of Darkness is NOT a Complete Game.

You Must own the Original Game, Nuklear Winter ’68 to Play Heart of Darkness. "