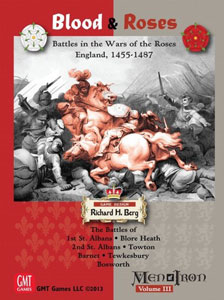 Blood & Roses focuses on the battles of the Wars of the Roses in England, between 1455 and 1487. This was warfare in which most men were truly "of iron", heavily and totally armored to such a point that their mobility was suspect. It was also the introduction of gunpowder – mostly field artillery – in noticeable numbers. And while many English men-at-arms were mounted, they did so almost entirely for transport. Most fighting was on foot … and it was quite vicious.

Historical Note: The game’s title refers to the heavy casualty rates and the names given to many of the fields after the battles: Bloody Meadow, Bloody Field, et al.

Blood & Roses is designed for quick learning and easy play. Game rules are short, there are no "turns" - play is Continual, with ample opportunities to steal play from your opponent - and combat resolution is a single dieroll. Playing time is about 1-2 hours, per battle.

1st St. Albans (22 May 1455) marks the first major engagement in the Wars of the Roses. Richard, Duke of York and his ally, Richard Neville, Earl of Warwick, defeated the Lancastrians under Edmund, Duke of Somerset, who was killed during the battle. York also captured Henry VI and forced Henry to appoint him Constable of England.

Blore Heath (23 September, 1459) where greatly outnumbered Yorkist infantry used the longbow and a defensive position to drive off the Lancastrian Men-at-Arms.

2nd St. Albans (17 February, 1461) where the Lancastrians drove the Yorkists out of the town and then destroyed Warwick’s strangely deployed army, even when sturdily defended by hedges, caltrops and spiked netting.

Towton (29 March, 1461) is easily biggest battle in the box and the biggest in the entire series. It uses over 200 combat units and, much like the actual battle, will probably take a long time to play. It is mostly crash and bash, with little room for maneuver, all fought in a blinding snowstorm!!

Barnet (14 April, 1471) a classic battle of planned deployments, but overlapping wings, cries of treason in the lines, fog of war (actual fog), and the excellent use of reserves.

Tewksbury (4 May, 1471) a battle that shows one of the key terrain features of the battles in this era, extensive hedges and thick underbrush in otherwise clear fields.

Bosworth(22 August, 1485) the best-known battle of the wars and the tragic (I think) death of King Richard III in a battle he should have won. Using the latest information as to where the battle took place, let’s see if you can cancel out the Tudor dynasty.