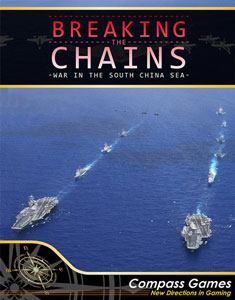 Breaking the Chains (BtC) simulates a hypothetical future military conflict over the South China and East China Seas around the year 2021. Conflicting claims of sovereignty have roiled those "near seas" since the Cold War. After decades of patient diplomacy, Beijing's new navy could offer military options for finally asserting sovereignty over prizes within the First Island Chain - that string of islands which runs from the Ryukus south through Taiwan, the Philippines and then curls back to the mainland via Malaysia. BtC presumes that China comes to blows with a Southeast Asian country in a conflict that could expand to possibly include: Australia, India, Japan, the United States as well as a variety of Southeast Asian nations. However, beyond China and one South East Asian nation, the exact composition of opposing coalitions is not predetermined but rather a function of the decisions players make as the game unfolds.

Two or more people play BtC with two reference cards, dice, and about 350 counters on a 22" X 34" map where each hex spans about 70 nautical miles (80 land miles) and each turn represents one day of real time. Players alternate maneuvering air, ground and naval units for up to 14 nations to resolve battles with a universal "strike" mechanism that applies across all types of combat; missile defense capabilities are central to survival. Air units represent from 30-90 aircraft each, most ground units are regiments, and naval units are small groups of surface ships/submarines or individual aircraft carriers. Specialized chit play simulates black ops, cyber warfare and various political developments.

BtC is solitaire friendly. The naval operations which dominate play are based on a roll-to-evade model rather than search-to-find model. That means, owing to a battle space awash in electromagnetic emissions, enemy positions - except for motionless submarines - are assumed to be known unless a last-minute dice roll determines a potential target has evaded detection. So there is no â??hidden movementâ? to stifle solitaire play; and the hidden placement? of submarines can be forgone. Finally, the special chits that govern black ops can be played at random to further enable solo game play.