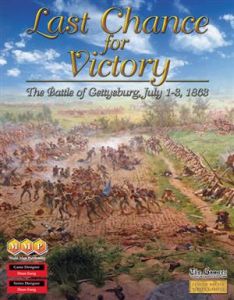 Last Chance for Victory is the next entry in The Gamers’ Line of Battle series (LoB) which simulates the Battle of Gettysburg. It is the second game in the series, following the well-received None but Heroes about the Battle of Antietam.

The story of Gettysburg is well known or, I should say, the popular rendition of the battle is well known and has certainly been simulated multiple times.

As is usually the case with stripped down, accepted versions of complex events, this narrative misses much flavor and deeper understanding of what went on. It’s the ‘auto-tour’ version of a much more involved event.

Many things are simply not brought out, or put into proper context, in the affirmed version of the battle:

Lee arrived on the field and tried to get his footing when Ewell (on his own initiative) ordered Rodes and Early to attack. Lee wasted no time in ordering Hill to attack with Heth and Pender to support Ewell’s Corps. In the commonly held view, Lee arrived and simply dithered while events unfolded outside his control.

There were several opportunities that afternoon and evening to advance and take Cemetery and/or Culp’s Hills. These were missed… but not, as commonly assumed, because one or more leaders were staring at their navels confused or indecisive. What happened and why?

Ewell made a clear headed decision his men were in no condition to take the hill that evening. He was the commander on the spot. Since then historians and armchair generals everywhere have questioned that decision, the game allows you to see who was right. Ewell was of the opinion that he could only do it if 3rd Corps supported him. That support was ordered by Lee (using 3rd Corps’ artillery) but was not implemented by the army’s chief of artillery. Would that have allowed the attack to work? What was the relative condition of the Union defenders and potential attacking troops anyway?

There never was any sort of ‘dawn attack’ order, but there were orders to attack much earlier on the second day than actually occurred. The game allows you to find out what went wrong (so you can draw your own conclusions as to who to blame).

By evening of the 2nd day, the fate of Cemetery Ridge rested in the hands of a handful of formed Union regiments (including the human sacrifice of the 1st Minnesota). Confederate victory was very, very close—teetering in the balance much more than normally assumed. There was a reason Lee said that if Dorsey Pender remained is command for another 30 minutes, the Confederates would have won the battle. See just how tough the Union job was and how close to the edge they got. What would have been the result of that Second Day’s attack had it launched just a few hours earlier or even at the same time, but with the coordinated use of Anderson’s and Pender’s divisions?

Everyone assumes Pickett’s Charge was a forlorn, desparate, throw of the dice, but what was the condition of many of the Union units manning that ridge? Was this attack a complete reworking of the Confederate battle plan out of blind frustration or was it a continuation of the plan from both earlier days? What was the earlier, theoretically coordinated, plan the attack was ad libbed from?

As a whole, the popular version of the battle pretty much assumes a Union victory unless multiple stars aligned for the Confederates. If this is so, did the Army of the Potomac have to merely put out a ‘fair-to-middl’in’ effort or did they have to fight tooth and nail to gain victory? If the latter, just how close of a run was it? Doesn’t “assuming they will win” take away well earned credit they had for finally overcoming a determined and usually successful foe?

Last Chance for Victory attempts to allow players to find their own answers to these questions and points as well as many others. The added depth and nuance makes for a very different and, in my opinion, more accurate rendition of the battle than you’ve ever seen before.

Aside from showing the history in a way that will be both entertaining but make you thirst for more and better reading on the topic, multiple variations are provided to explore the battle. Sure, there are the usual “extra troops” variants, but more importantly, options that allow players to tweak the various historical behavior ‘knobs’ I assigned. If you think my ‘setting’ for Howard (to pull a name out of a hat) are all wet, you can change him to be better (or worse) so you can see how your version ‘plays.’ Likewise, a number of rules simulate activities that were pretty much out of the players hands (such as Buford’s need to screen the town yet keep his losses very low), these can be ‘turned off’ as desired to see what effect they really have on the battle. There is a matrix of the various ‘control’ rules and the possible ‘settings’ for each one that players can use before starting if they disagree with my decisions. The results of your choices might surprise you and spur your understanding of the battle to new levels.

As with None but Heroes, Last Chance for Victory is designed to bring all of this and much more to your table in the most historically accurate and informationally jam-packed game possible. Like any LoB game, it was designed with twin goals: the most insight possible and a game with maximum playability.

Enhancing the already popularly received and streamlined Line of Battle rules, Last Chance for Victory comes with the v2.0 series rules. These rules incorporate the refinements and suggestions of hundreds of real players which make the smooth system even faster to play. Make no mistake, this is the only regimental level Gettysburg game that can be played to completion at a respectable clip—yet it is a large game. A pair of reasonably fast players could play the campaign game to completion at a convention like ConsimExpo. I’ve completed campaign games with three players in a week of rather relaxed play time.

Scenarios abound of various sizes. The campaign uses a 4-map ‘box’ layout, but the game comes with two additional maps, one covering just the 1st Day’s fighting and the other the 2nd and 3rd Day’s. The big game scenarios can be played on one or both of those maps plus, with those two linked together, it is possible to play the entire battle on 2 maps.

2,240 Counters (Check out some samples here and here!)

22 Scenarios… with up two three size variations each, one of which is one map for each!