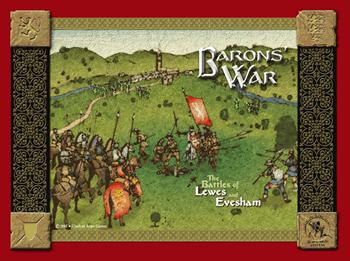 take on a rarely covered period of English History. These battles took place in a unique period, before the longbow had pained predominance of the battlefield, when cavalry was still the most lethal weapon in the English arsenal.

Lewes and Evesham bookend Simon's brief period as the power broker of England. Lewes took place in 1264 and pits Simon, with support from many of the prominent barons against Henry III and his royalist faction. His victory and imprisonment of Henry made him king in all but name, Evesham, fought one year later, finds Simon weakened by the treachery of his own barons, facing the much more dangerous Prince Edward. It would be Simon's last battle.

The system provides a unique simulation of 13th century warfare. With only 12 pages of rules plus commentary, the game plays fast (less than two hours) and furiously. Each player much preplan the orders for his Battles with the use of Command Points. The system has built-in limitations on leaders and troops, fog of war, and the chaos of the medieval battlefield. More importantly, it does this by employing a simple, elegant mechanic, allowing players to focus on the game and not struggle with the rulebook.

The game turn is interactive, where players must commit the orders of their Battles to seize the initiative and go on the attack, or hold back on defense. Players must carefully time when to commit to action the plans they have made. Or, should things go badly, they will be forced to make the difficult choice of when to change their plans and react. And be forewarned - the cavalry of the era is impetuous - the movement of enemy troops may trigger a mad charge for glory that neither player expects.

Rules also cover individual unit morale, cohesion, ranged fire, melee, and leadership, including special rules for Prince Edward and his Battle . Both the battles of Lewes and Evesham are covered in historical as well as "what if" scenarios. Baron's War is fast paced, plays quickly, and has high replayability.