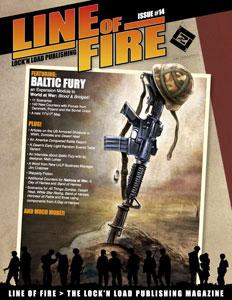 Line of Fire #14 is packed with almost 60 pages of articles which include: US Armored Divisions in WWII, Zombies and Desert Heat. We also have an interview with Baltic Fury designer Matt Lohse about the module, a Dawn's Early Light Random Events Table Variant, an America Conquered Battle Report, Warparty Fiction and a review of Dust Tactics.