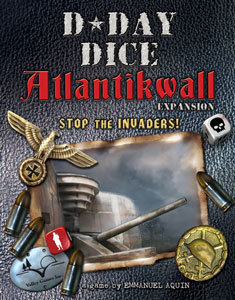 An expansion for D-Day Dice that lets one player play the German side. The German player can be added to any existing Map. He can transform a 2-player game into a head-to-head confrontation, or be added to any group of players.

Think of the German player as the Battle Map itself. It is up to him to “activate” some of the features of the Map, and to make life difficult for the Allies. He plays like all the other players, rolling dice to gather resources, and spending those resources to recruit Specialists and find Items. The main difference is that the German does not move: instead, he uses his Courage to draw cards from the "Decorations" deck, which give him special one-time abilities.