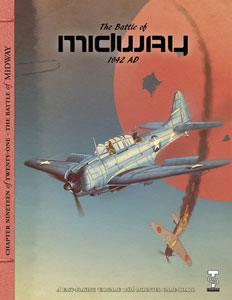 The selections of some of the “decisive battles” have sparked conversations over the years. Vicksburg over Gettysburg? The Metarus over Zama? Syracuse?

No one has ever questioned the selection of Midway as the decisive battle of the Pacific War. All agree that this one changed everything, as the Japanese plan to “lure” the remaining US fleet to its destruction led to a strategic defeat, due to code breaking, heroism, and remarkable timing.

Now you can play out this exciting battle and see if you can do better. The Battle of Midway, June 3-6, 1942 gives you all the parts you need to gain insight into the questions facing both sides. Paul Rohrbaugh’s design blends clean simplicity with a fine level of detail (even accounting for the Japanese planes intended to be assembled and used on the captured island!). It includes an overview map-board of the area, an off-map battle board, and a variant map with Midway in detail, where, for the first time, you can pursue the actual Japanese invasion of the island and see what might have been.

Rules cover battles in the air, planes versus ships and versus land, surface to surface, submarines, seaplanes, and more, all in rules designed to be fast, combined with challenges that encourage replay.

You know the history.

Now, see if you can change it.

That means straightforward rules, key insights into the history behind the game, and designs aimed at one-session conclusions and high replay value."

The Battle of Midway 1942 AD includes:

• This set of rules