Strategy & Tactics 285: Duel on the Steppe 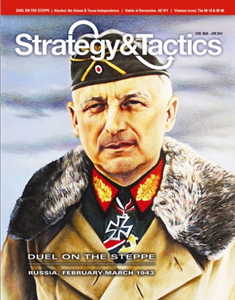 Duel on the Steppe is a simulation of the Winter Campaign in the Ukraine, from 29 January to 17 March, 1943. Known as Operation Star and Gallop, the Soviets arrayed their incredible numerical advantage against some of the best units in the German army. This game uses the same rules system as Sedan: The Decisive Battle for France, May 1940 (World at War #24), and Tobruk: Operation Crusader, Nov-Dec, 1941 (Strategy & Tactics #278), but is modified appropriate to the scale and the theater. Here, the Soviets have air superiority, albeit somewhat uncoordinated.

Duel on the Steppe includes one counter sheet (228 counters), and one map of the Ukraine area of the Soviet Union (approximately 260 miles, or about 418 kilometers), each hex representing about 6.5 miles (~10 kilometers). Unit sizes vary from kampfgruppes to corps, the latter which can be broken down into smaller formations for more operational flexibility, or simply to absorb casualties.