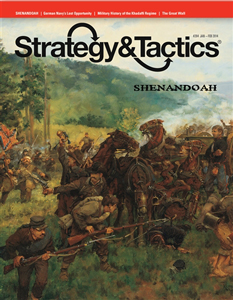 Jackson’s Shenandoah Valley Campain' is loosely based upon the Twilight’s Last Gleaming (2) rules system (S&T issue #225), and simulates the movement of Gen. “Stonewall” Jackson’s army into the Shenandoah Valley in 1862, raiding the Union forces and allowing Jackson to move out to reinforce Gen. Robert R. Lee’s forces outside of Richmond to participate in the Seven Days Battles that decisively defeated the Union Army of the Potomac. One player plays the Union, and the other player plays the Confederate. The Confederate player will primarily be the attacker, but an observant Union player may have plenty of opportunity to counterattack.

Each combat unit generally represents 250 men or two artillery pieces; however, adjustments have been made to reflect individual unit levels of élan, proficiency, command control, etc. Each game turn is equivalent to one hour of actual battle time. The distance from side to opposite side of each hexagon on the map is equal to 300 yards.