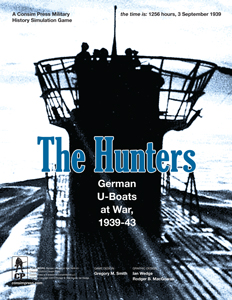 “Hostilities with England effective immediately” was Oberkommando der Marine’s (OKM) urgent, encoded message sent to all Kriegsmarine ships, U-Boats, and shore stations at 1256 hours, 3 September 1939, in response to Great Britain and France declaring a state of war against Germany.

During the initial stage of the Battle of the Atlantic, the German U-Boats experienced great success in destroying Allied shipping. Wolfpacks—groups of submarines swarming over targets—proved to be a lethal force and would become a positive strategic impact for the Germans. The Allies would soon find themselves scrambling and suffering horrific losses at sea at the hands of these silent hunters. However, the Allies would not only stem the tide in due course, but turn it in dramatic fashion in early 1943, thanks to counter measures that included convoy tactics, high frequency direction finding (“huff-duff”), radar, active sonar, and more. Suddenly, the U-Boat fleet was being decimated, as the Hunters became the Hunted and the Allies gained air superiority above the seas. German U-Boat losses alone tell the story. Through 1941, only 66 U-Boats were lost. During 1942, another 96 U-Boats would be lost. And then, in 1943, no less than 237 U-Boats were sunk or scuttled at sea.

The Hunters, German U-Boats at War, 1939-43 is a solitaire, tactical level game placing you in command of a German U-Boat during WWII. Your mission is to destroy as much Allied shipping and as many capital ships as possible, while advancing your crew quality and increasing your commander rank, culminating in special decoration—all while remembering you have to make it home amidst diminishing odds of survival as the war progresses.

The Hunters is purposely designed to deliver a brisk yet intensive gaming experience that forces many decisions upon you as you will take command among the major German U-boat models in service during WWII, and try to complete an entire tour.