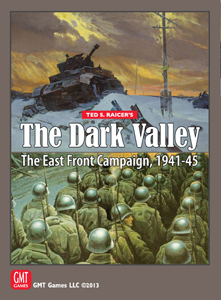 The Dark Valley is Ted Raicer’s two-map 1941-45 East Front game. The map (at approximately 20 miles to the hex) runs from Berlin to Stalingrad and Leningrad to Grozny. Units are division, corps, and armies.

The game includes four scenarios (Barbarossa, Blue, Kursk, Bagratian) as well as the full Barbarossa to Berlin campaign. The scenario start dates can also be used to play through to spring 1945. The scenarios should be playable in a long day - the campaign, obviously, is a multi-day affair. Nevertheless, this is a playable monster, designed to be enjoyed and not just admired in its box.

The Sovs start out as divisions (plus 41-style mech corps and a few cavalry corps), then add in armies. Armies arrive as reinforcements. Later Guard Rifle Corps are formed from 3 rifle divisions each. Guard Tank Armies can later be formed from any 3 tank/mech corps, provided they have at least one each tank and mech corps, and one of them is a Guard Tank or Guard Mech Corps. These armies pack tremendous power into a single hex. Guard Corps can be combined into Guard Armies (3 Guard corps per army, maximum of 11).

The Germans meanwhile have Corps and individual divisions (all motorized, panzer, panzer grenadier, light, mountain, and para units are divisions).

The combat system gives the defender even at the best odds (the 6-1+ column) a 50% chance of surviving, unless surrounded by units or ZOCs (which at 6-1 reduces his chances to zero) or is out of supply (which reduces his chances to 1 in 6). So instead of simply vaporizing the initial Soviet line (as in many games) the Germans will find they have to open holes, pocket, and kill the pockets.

The game uses a random chit draw activation system. Chits include Move, Combat, Panzer Army activation, Soviet Counterattack and Deep Battle. The exact chit mix depends on the year, the weather, and to a degree, player's choice. There is also a Logistics chit so that when to check supply is variable each turn. The Germans draw supply from depots that move (by die roll) a variable amount each turn, but may use Panzer HQs to extend supply.

The air war is fairly abstract - basically air to air combat is built into the declining number of German air units and some drms, but air/ground effects are shown in some detail. Most Soviet Air Armies (and there are eventually quite a few) simply add 1 CF in Combat (maximum of +2 per any one combat). This also true of Axis Allied air.

Then there are the German air units and a Soviet Strategic Air unit that may add to combat, interdict movement, or attack ground units directly. Combat is odds not vs. the enemy units but the terrain in the target hex.