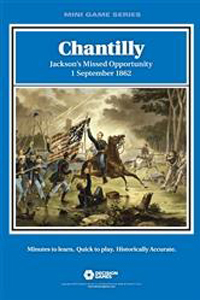 After the Confederate victory at Second Bull Run in August 1862, the beaten but still aggressive Union army pulled back to a new position at Centreville. Stonewall Jackson embarked on a wide sweep to flank the new position, but fatigue and mud slowed his march just enough. The Confederate column

was spotted, and hastily dispatched Federal units rushed to block it. The converging columns clashed east of the Chantilly plantation. At stake was the possibility of surrounding an entire Union army or crippling an isolated portion of a Confederate army. Both sides fought a disjointed battle that petered out inconclusively in a thunderstorm, but it need not have been so.

Chantilly uses the QuickPlay version of the Musket & Saber system to simply yet accurately portray warfare during the muzzle-loading era. Combat is based on unit quality rather than raw numbers, and rewards use of historical tactics. Infantry, tough and resilient, bears the brunt of battle. Artillery can smash attacks or open holes in enemy lines, but is vulnerable and brittle. Cavalry is weak in standup combat, but crucial for pursuit and the occasional charge against a broken foe. All units are susceptible to rout when weakened, so players must maintain reserves. Leaders enhance unit capabilities. Winning the battle depends on deployment, thoughtful maneuver to concentrate at the key points, the proper coordination of arms, careful use of leaders and special units, and an understanding of the strengths and weaknesses of each army.