Iwo - Bloodbath in the Bonins 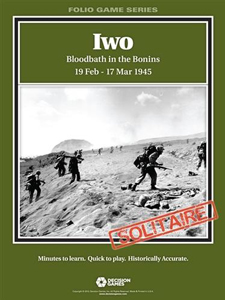 Iwo Jima was a critical point on the flight path of US bombers from their Saipan bases to their Japanese targets. The island would be a refuge for malfunctioning or damaged bombers coming or going. An obvious target for a US amphibious assault, the Japanese had reinforced the garrison and dug miles of tunnels the length and breadth of the island. Their goal was to inflict maximum casualties on the Americans to force them to reconsider the seemingly inevitable invasion of Japan. The resulting battle was brutal, even by the standards of the Pacific War. Iwo is a solitaire game using a modification of the Fire & Movement game system. Developed to portray the mechanized battlefields of a later generation, F&M stresses the use of fire support to generate breakthroughs, followed by a rapid penetration by mobile reserves. On Iwo, the Japanese fought from within an extensive tunnel network, neutralizing the usual fire position. The Japanese units are hidden, their strength revealed only at the instant of combat, so the US player must mass against a position to play it safe, using fi re support to suppress the defenders and so reduce attacker casualties (a key victory condition). On the other hand, the US player must clear the island to win, and time is not on his side. Sooner or later he must take risks to push the battle forward. Taking some terrain, like Mount Suribachi, is critical to weakening the islandâ€™s defense.

The Japanese defense is handled by a short, simple set of priorities when conducting Japanese bombardments, punctuated with an occasional Banzai charge. A too-weak attack against a bunker may only displace the defenders to another position, where they will have to be attacked again. The rules include an option for a two-player game, with a second player handling the Japanese forces.