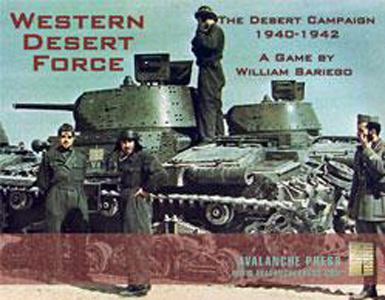 In September 1940, Italian divisions rolled over the border between their colony of Libya and British-dominated Egypt. After advancing several dozen miles they stopped to secure their supply lines, only to meet a devastating British counter-attack that soon had them reeling back halfway across Libya. For the next two and a half years, Axis and Allied armies surged back and forth across the North African desert until finally Gen. Bernard Law Montgomery's British Eighth Army wrecked Erwin Rommel's vaunted Panzer Army Africa.

Western Desert Force is a quick-playing game from the same designer as our Defiant Russia, following the same philosophy: a game you can play in just an hour or two, with the emphasis on tense action and lots of fun.

The map portrays the North Africa from El Agheila to Alexandria. It's divided into hexagons, at a scale of 15 miles across each.

The objectives for each side are simple: kick the enemy out of North Africa. The strategy is not so easy: the Allies must hold on to protect the Suez Canal; the Axis must choke off this vital waterway. Neither can afford to be ejected from the otherwise worthless desert.

The game design is by William Sariego, and development is by industry veteran Paul Dangel in his Avalanche Press debut.