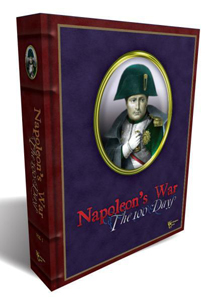 Napoleon’s War comes with 4 battles, each with its own map. The battles included are Quatre Bras, Wavre, Ligny, and Waterloo. This game uses a modified system of Worthington Games highly popular Hold the Line game. For the playing pieces there are 120 plastic figures representing the French, British, and Prussian armies, as well as counters for special units like horse artillery, and elite infantry. Each battle is playable in 1 to 2 hours and the game is easily learnable by a 10 year old, with layered rules that will make it enjoyable for the avid war gamer.

Each army is made up of 24 colored plastic infantry figures, 8 cavalry figures, and 8 artillery figures. The beautiful game box is designed to look like a book sitting on the book shelf. This is the first of a 3 Volume set that will have battle packs issued for it. Volume 2: To the Gates of Moscow will be available in late summer/early fall.