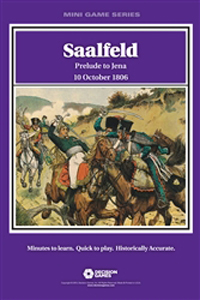 In October 1806, Napoleon’s Grande Armee is descending on western Saxony in multiple columns. The Saxons and their more powerful Prussian cousins are gathering to give battle. On 10 October, the advance guard of one French column crashes into the advance guard for one wing of the allied armies. A French victory will open the possibility of splitting the allies; an allied victory will threaten the flank of the other French columns. Time presses both. The forces are equal in strength; victory goes to the player who best understands the strengths and weaknesses of each side.