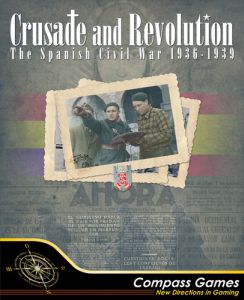 "CRUSADE AND REVOLUTION: The Spanish Civil War, 1936-1939" (C&R) is a card-driven point-to-point movement strategic-operational wargame that covers all the Spanish Civil War (1936-1939). Its rules are based on Ted Raicer’s "Paths of Glory".

Each player takes command of one of the sides (Nationalist or Republican), and looks after all the aspects that involve a war: mobilization, recruitment, movement of troops, offensives, construction of defences… There are also historical events that must be taken into consideration, as the foreign military aid, international policy, change of Republican Government, etc.