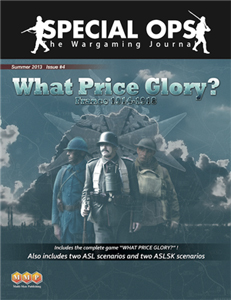 A new Area/Impulse game and Card Driven Game (although not in the standard way) on the Western Front in World War One.

Units are approximately corps-sized, and each of the ten turns represents half a year. Each side alternates activating units to move or fight by card play, either as a "simple" action or by using the text on the cards for additional or enhanced actions, including play of card combinations. Players choose their hand of cards from their entire pool of available cards at the start of each turn, which rewards good planning and anticipation of opponent's plans. One Event card is added to the pool each turn starting on the third; these handle high-level options like submarine warfare or USA entry.

What Price Glory? can be taught and played to completion in three or four hours. Experienced players can shave an hour off that time.