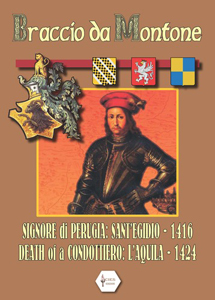 This boxed game will let you refight the more decisive battles of the notorious and respected Condottiero of the first half of XVth century: Braccio da Montone. The game system is the same as that of Guelphs and Ghibellines and Sa Battalla, integrated with ad hoc rules needed to reflect the different tactics invented and used by Braccio (the so-called Scuola Braccesca). The game simulates the two major battles fought by the condottiero: Sant'Egidio (July 12, 1416), whereby he became Lord of Perugia and l'Aquila (June 2, 1424), in which he was defeated and mortally wounded