The Flight of the Eagle volume III 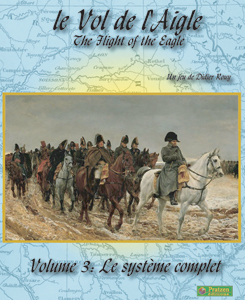 Le Vol de l'Aigle (the Flight of the Eagle), is a double-blinded system using an Umpire. Players can communicate only through written messages. It uses maps of that time and a simple system to manage units. Combats are solved using a face to face system, simple but precise, with the morale as the main endpoint. Combats can also be solved using any existing operational or tactical system including miniatures.

The present volume 3 does not need the volume 1 or 2 to be played. It includes four booklets (three are over 60 pages) including all the rules of volume 1 and 2, a new edition of the tactical rules The Eagle Fights, 50 pages of data to transfer all the armies of the time between both systems, the special rules of the ten campaigns included: Bavaria and Austria 1809, France 1814 and the eight Peninsula campaigns in Spain and Portugal (around one a year between 1808 and 1814). Seven maps and 52 units sheets are included.