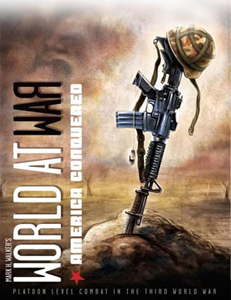 The nukes have flown, and darkness has spread across the globe. Yet the missiles didn’t bring the apocalypse many had predicted. Rather than total, the exchange of nuclear-tipped missiles was limited. Rather than complete, the destruction was merely crippling. Now the war continues, fought with a strange mixture of equipment—some of it more suited to a museum, some of it fresh off the assembly line.

And the war continues on America’s own soil. Devastated by the nuclear exchange, the remnants of America’s once mighty military, aided by a smattering of their NATO allies, fight against a horde of ravenous predators including Cuba, Nicaragua, and their Central/Southern American allies, hoping against hope to hold their country until the last vestiges of their mighty European army returns home.

Command formations of Nicaraguan T-72s against American M-48s, fight Cuban T-62s with Canadian Centurions, and battle against Soviet Spetsnaz with the indomitable French Foreign Legion. America Conquered introduces airboats that fly over river and swamp alike, Texan cavalry that ride disrupted infantry into the ground, mixed-equipment platoons that allow gamers to split their units to take advantage of their unique equipment, and American fanatics that will kill themselves rather than lose their country. New terrain includes swamps, sparse/destroyed city, and much more.