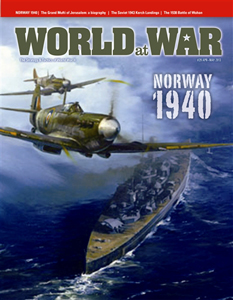 Norway, 1940 is an operational level wargame of the German campaign to conquer Norway in 1940. The operation was a combined naval-air-land campaign in which all elements of military power were utilized. The historical campaign saw a German victory, but at the cost of much of the Kreigsmarine. Norway, 1940’s game system is based on S&T's award winning Red Dragon Rising system. It has been crafted to present the campaign as a unitary vision rather than a strictly sequenced process. The Action can alternately telescope or expand, representing periods of rapid activity alternating with the slower process of building up forces.