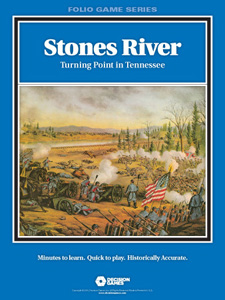 The Union Army of the Cumberland had been pursing the Confederate Army of the Tennessee after the Battle of Perryville, in October 1862. Throughout November the Confederate commander, Braxton Bragg, had misinterpreted that pursuit as an effort to capture Chattanooga; so now he halted and deployed his troops northwest of Murfreesboro, Tennessee, so as to safeguard the road junction there. Thus the Confederates sat and awaited their pursuers for a month. When the Federal army arrived in late December 1862, the Confederates launched a surprise attack near Stones River.

Stones River utilizes the all-new Musket & Saber Combat System, which presents a simple yet accurate portrayal of warfare during the American Civil War. The combat system is intuitive, including all the details that characterized battle during the Civil War while also simulating the unique aspects of 19th century warfare. Units can become weakened and rout; attackers can pursue, and the fortunes of war can intervene at any time. Cavalry can rip open enemy lines and shred fleeing units, and reserves must be ready to plug holes or secure a line of retreat.

In Stones River a new Combat Results Table emphasizes playability while also simulating the lethality of the rifled musket. Leaders accelerate the action, replicating the importance of their presence during battle, and supply lines require players to protect their logistical trains. Winning a battle will depend on deployment, maneuver and massing firepower, as well as the strengths and weaknesses of each particular army.