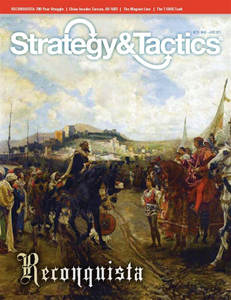 Reconquista! is a two-player simulation of the Christian reconquest of Iberia from the Muslim Moors. One player directs the Islamic Caliphate, the other an assortment of not always cooperative Christian kingdoms. Each turn represents 25 years. Play starts in 850, when the Christian advance began in earnest, through 1250, by which time the outcome was inevitable.

The game includes an area movement map and 200+ counters representing Andalusians, North African jihadist forces (Almohades and Almoravides), Frankish, Catalan, Aragonese, Asturias/Leon, Castilians, Portuguese, Military Orders (Templars, Santiago, etc.) and Christian Crusaders. The Christian player controls the Christian kingdoms except when a "War among infidels" event gives the Islamic player control of one Christian kingdom's units for that turn. The Frankish units are generally neutral, but the Islamic player can try to activate them via random events (simulating the assorted wars between the Frankish and Aragonese kingdoms, especially during the XIII century).