ASL Into the Rubble 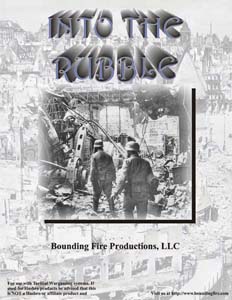 Into The Rubble (ITR) offers players the opportunity to do cardboard battle in cities and railroad yards. The scenarios range from 1938 to 1945 with a variety of forces including American, Chinese, German/SS, Hungarian, Japanese, Nationalist Spanish, Republican Spanish, Romanian and Russian.

The Battlepack includes the following: