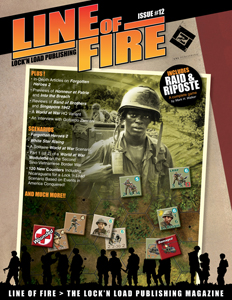 This issue is like no other before it. Not only does it contain the articles and scenarios you expect, but this issue includes Raid & Riposte, a Complete Game by Mark H. Walker. That’s right, counters, map, rules, the works. This issue also features A LOT of content on the recently published Forgotten Heroes Vietnam Second Edition:

A detailed review of the game, including an extensive example of play.

An in-depth historical article providing background for many of the scenarios.

An article on the American LRRPs.

But it’s not just about Forgotten Heroes 2. The issue also includes:

Previews of Honneur et Patrie and Into the Breach.

Reviews of Band of Brothers and Singapore 1942.

A World at War HQ Variant.

A World at War scenario that pits West German Recon elements (from the Compendium) against elements of the Soviet 93rd Recon (from Blood & Bridges) for the city of Bitterfeld (map from Battles within Battles).

A Solitaire World at War scenario depicts Soviet and East German forces attempting to quell the Polish Solidarity Movement in 1980 (uses components from The Untold Stories and Eisenbach Gap).

Part 1 (of 2) of a World at War Modulette on the Second Sino-Vietnamese Border War in 1985 (37 New Counters Included!; The Untold Stories required).

Plus Nicaraguans (New Counters Included) take on Americans in a Lock ‘n Load scenario based on events in the upcoming World at War module America Conquered.

60 pages of content! A complete game! 88 new counters! What more could you ask for?