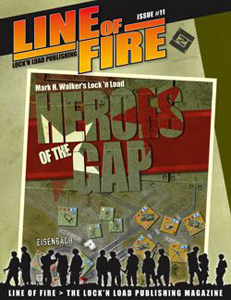 Fall into another awesome autumnal issue of Line of Fire! Yes, Line of Fire #11 is now available for immediate download, or for purchase of the printed version.

Line of Fire #11 contains 60 stuffed pages of content. Prepare to overwhelm your senses with tactics articles for Space Infantry and Heroes of the Gap; in-depth battle reports on scenarios from White Star Rising, Island War Deluxe and “Hot War” from the World at War: SADF Chapter. The Lock ‘n Load National Capabilities Chart gets updated with units from Heroes of the Gap. An interview with Peter Bogdasarian provides insights into Tank on Tank East Front. There’s a gamer’s impression of Warparty, previews of White Star Rising: Operation Cobra and Heroes of the Pacific, riveting reviews of Worthington Games’ Boots on the Ground and Warlord Games’ Hail Caesar, plus The Cardboard Curmudgeon strikes again, and more.

And, of course, no issue of Line of Fire is complete without scenarios—plenty of scenarios! Ten of them use components from the ever-expanding World at War system, including a three-scenario modulette set in Iran pitting the US Marines (from LoF#10) against the Soviets in two of them and a large clash of armor in the third—hint: It’s all about the oil. Antsy for some WWII squad-level combat in the Pacific before Heroes of the Pacific comes out? Well, quell that need with two Island War Deluxe scenarios that have a personal connection with their designer, Ralph Ferrari. In a Band of Heroes scenario, Paras from the 101st Airborne drop into Holland for a bloody battle for the bridge at Son during Operation Market Garden. A large-OOB, full-board Heroes of the Gap scenario sends the Soviets into the Eisenbach Gap in a two-pronged attack, a hammer and sickle poised to pound the well-equipped but outnumbered Yankees. Finally, it wouldn’t be the Halloween season without some Zombies. A Thanksgiving-themed All Things Zombie scenario explores a different kind of Black Friday shopping. And from the twisted mind of Mark Mitchell comes an interesting hybrid scenario, “Day of the Zed.” ATZ and A Day of Heroes come together in a bizarre battle of American Rangers and 10th Mountain soldiers being sent into Last Chance, NV, to rescue stranded National Guard troops from an onslaught of brain-hungry Zombies. It’s a solitaire scenario that uses mostly LnL rules, borrowing a couple from ATZ, and requires both games to play. It’s LnL, it’s ATZ, it’s fun on a previously unimagined level. Only in Line of Fire #11!