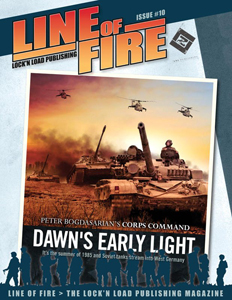 Another huge issue of Line of Fire is almost ready for action. What’s in it? Glad you asked.

Corps Command: Dawn’s Early Light takes center stage (and the cover) with an exciting expansion that includes a new 11”x17” map, 40 vivid new counters, featuring the US 11th Armored Division, Airmobile Troops from the 101st Airborne Division, the West German 27th Panzergrenadier Brigade, the Soviet 171st and 232nd Motor Rifle Brigades and the 23rd Guards Tank Division—a Recon Battalion and four Regiments! These counters will battle it out on the new map in two scenarios. A batrep on the DEL scenario “The High Road” is also included.

What else, you ask?

The 60+ page issue is packed with articles on Summer Lightning; Space Infantry; Warparty; and Heroes of the Gap; an interview with Zombie War designer Greg Porter; reviews of Compass Game's Steel Wolves, another offering from The Cardboard Curmudgeon, and much more.

The United States Marines Enter the World at War.

That's right. In this edition's two South African scenarios, the United States Marines make their long-awaited debut. The 2nd MEU lands to aid the hard-pressed SADF, adding LAV-25s, LVTP-7s, awesome Marine infantry with better firepower than their army counterparts and the ability to move and fire. Providing top cover is a flight of Cobra attack choppers, while a clutch of CH-46 transport helicopters can assist in the Marine's doctrine of vertical envelopment. There are 14 Marine counters in all. By far the largest American formation we have fielded. Don't however, feel sorry for the FAPLA and their Cuban allies. The Cubans get a spiffy new T-62 tanks, and Hind helicopter support. Meanwhile the FAPLA get an anti-aircraft gun battery, Sagger-armed BRDMs, a platoon of PT-76 recon tanks, and coolest of all--suicide bombers. We didn't leave out the SADF, they log in with a lethal sniper. All-in-all, it's almost like a mini-World at War expansion.

Hey, what are those cool-looking Lock 'n Load system tanks?

Why we thought you'd never ask. To celebrate the release of Heroes of the Gap (which we *think* will be in the warehouse by the end of June), we've included five new Lock 'n Load 1985-era vehicle counters. In this issue, you'll receive a British Striker, Challenger, and Chieftain. On the Soviet side of things we present a pair of Black Eagle tanks to roll into battle.

For White Star Rising the British get a Sherman flail platoon, and a recon jeep for the Arnhem campaign. And that strangely awesome-looking Sherman is for Island War Deluxe, as is that Jap 37mm.

How about a lot of them? In addition to the two new DEL scenarios there’s six White Star Rising scenarios, including a five-scenario campaign on the British Airborne assault on Arnhem during Operation Market Garden; three for All Things Zombie; the serial World at War: SADF module continues with two more scenarios and four other WaW scenarios will help quench your WW3 thirst; plus there are scenarios for Tank on Tank, Brothers By My Side, Heroes of the Gap, Heroes of the Blitzkrieg and A Ring of Hills.