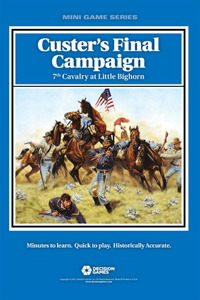 In 1876 the US Army engaged the Indians of the northern Great Plains in a campaign that culminated in the destruction of Gen. George Armstrong Custer and most of his command at the Battle of the Little Bighorn. This two-player game covers that entire campaign.

One player commands Army forces, including the regiments and battalions forming the three commands that participated in the original campaign: Crook’s, Gibbon’s and Terry’s. The other player controls various Indian tribes, each rated for its fighting strength in warriors. The point-to-point map stretches from Fort Abraham Lincoln in the Dakotas to Helena, Montana. In between are famous historic battle sites such as Powder River, the Rosebud, and the Little Bighorn.

Custer’s Final Campaign is part of the Hand of Destiny mini-game series. Each player has a unique deck of Campaign Cards. They generate movement abilities, combat bonuses and historical events. Accessing the right card at the right time lets the player concentrate forces to win that great victory against all odds—or perhaps go down to inglorious defeat. Some of the cards include: Tribal Raiding, Indians Leave Reservation, and Gary Owen.

Combat is resolved via a quasi-tactical procedure. There are special rules for: Gatling guns, “dog soldiers,” Army riverboats, and leaders such as Crazy Horse, Nelson Miles, Sitting Bull and Custer himself.