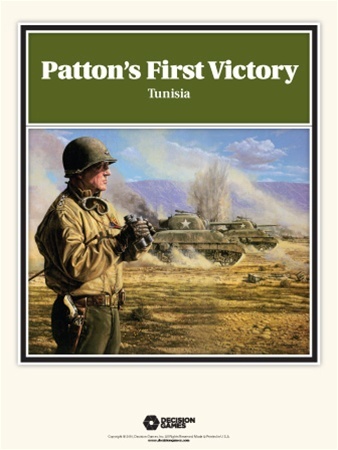 Patton’s First Victory is an all-new echelon of wargame, providing a simple, yet accurate, simulation of World War II’s Tunisian campaign and featuring a mere four pages of rules that elegantly recreate the battles fought between Allied and Axis forces.

In addition to its simplicity, Patton’s First Victory is marvelously accurate, featuring the full order of battle of historic divisions that were engaged during the struggle for Tunisia, as well as allotments of “support assets” that can be assigned to those divisions to increase their combat strength. Should the Axis player assign his few support assets to his best divisions to form powerful strike groups, or should he use them to augment his light units desperately defending the ridges?

Patton’s First Victory portrays all the elements of the actual campaign. The terrain is historically accurate; every town and airbase is precisely correct, and every unit is rated with precise combat factors. You will see why the 10th Panzer Division was so formidable, and how Patton was able to defeat the vestige of the famed Afrikakorps.

The entire Tunisian campaign can be played in a couple hours, yet Patton’s First Victory remains a game requiring operational skill. The Allied player must maintain the momentum and keep pressure on the Axis, fighting for a breakthrough to capture enough of the important Tunisian harbors to win the game. The Axis player must manage his scant yet potent army and air force to repel the attacking Allies, all the while watching for opportunities to counterattack and throw the throw them back in disarray.

Patton’s First Victory is a quick and easy game of the 1943 campaign between Allied and Axis forces in North Africa during World War II. It’s spring 1943; the Allies have arrived to liberate Tunisia from the Axis, but the Axis soldiers are experienced and commanded by some of the best generals of the war. If Axis forces can hold on in the Tunisian mountains, they can delay the progress of the war in the west indefinitely. If the Allies can capture the Tunisian harbors, they will cut off the Axis from all supply and escape.

One Rules booklet for this series