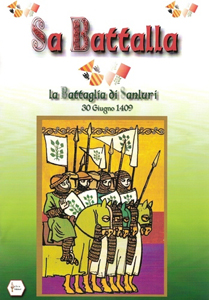 Sanluri, June 30th, 1409. After centuries of struggle for the control of the island the two armies of William III of Narbonne, Judge of Arborea, and Martin “the Younger”, king of Sicily and Sardinia, face each other for what will arguably be the decisive battle for the destiny of Sardinia.

The first idea of Sa Battalla comes from a group of Sardinian players who wanted to create a simulation of this important, albeit not very well known, battle at the time of its 600th anniversary (1409-2009). The game system used is the same as that of "Guelphs and Ghibellines" published by Europa Simulazioni. In the game, each player takes the role of the Commander-in-chief of one of the two armies. Each army consists of various "Battaglie", with each "Battaglia" composed of various units. The players are given the task of choosing and issuing specific orders for their "Battaglie". The game system emphasizes the progressive deterioration of the "Battaglie" efficiency during the battle and tries to simulate the entropy on the field of battle and its effects on the chain of command and the "victory perception". The game includes rules for historical, alternative or "free" scenarios.