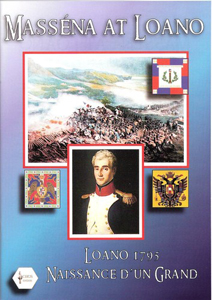 Loano, 23-24 November 1795. Masséna at Loano, is a two-player simulation of Napoleonic warfare at regimental/battalion level for the Revolutionary Wars period.

The title wants to be a reward for who probably was the best general during the first years of Bonaparte’s campaigns.Loano battlefield presented some features which the wargaming world did never explore or did partially: mountain warfare in the age of French Revolutionary Wars. The battle itself was not a decisive one. It allowed the French to maintain a bridgehead in Italy with more chances of supply than the naval option, very dangerous due to cruising British ships. Maybe it revealed a modest and good (not a genius) French commander, Schérer, but, above all, saw the birth of the republican military star, general André Masséna, who will put Napoléon out of troubles in many future battles (i.e. Rivoli 1797). The Austrian counterpart was, as usual, the common mix between ridiculous chiefs and heroic lower officers. So no news here.