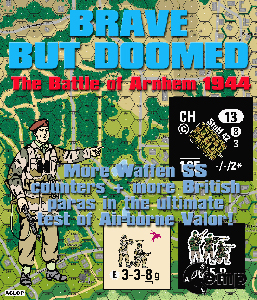 OOSTERBEEK, THE NETHERLANDS, 17 September 1944: Hurrying down the Utrechtseweg towards Arnhem, 3 Battalion were surprised by a German staff car rolling through the intersection in front of them. Many of the men in the lead platoon opened fire, killing Arnhem Commandant General Kussin and his aides. As the echoes of gunfire faded away, the now-primed men of 3 Battalion moved on. As they neared the next crossroads they suddenly came under fire themselves. Blocking the way was a German position centered on a self-propelled gun, part of SS Major Krafft’s No. 2 Company. B Company’s No.5 Platoon was in the lead and quickly took several casualties, including the platoon PIAT. None of Lt. Cleminson’s men had primed Gammon Bombs to hand, so with no real way of tackling this menace the men scattered and sheltered in some nearby houses and gardens. Major Waddy tried to launch an attack, but found the fencing between houses made maneuver very difficult. The paras engaged the Germans with their Brens and Stens while others hurriedly tried to turn an exposed supporting 6-pounder anti-tank gun. The German SPG blew up the Jeep, striking down the gun crew an instant before it could fire. After this brief but intense gunfight, No. 2 Company pulled back, afraid of being outflanked by the paratroopers, taking with them a number of British prisoners. 3 Battalion hitched up their gear and moved on, already far behind schedule.

BRAVE BUT DOOMED allows you to recreate the classic struggle of the Battle of Arnhem on a never-simulated-at-this-scale rendition of the battlefield. And to do it in the ultimate detail, house-by-house, at 50 yards scale. This module does not purport to answer whether Monty’s bold gamble to cross the Rhine and break into the heart of Hitler’s Third Reich could have succeeded. Nor does it have anything to do with whether ‘Market Garden’ aimed one or more bridges ‘too far’. Instead, BRAVE BUT DOOMED puts the gamer literally inside the hexenkessel, hammered by two Waffen SS panzer divisions day after day.

Here comes another great collection of color die-cut counters! All the British airborne you need to play the scenarios plus additional Waffen SS counters for owners of Hell's Bridgehead 3 (or the counter sheet that came with that product, available separately) to fill in and make it a CH combat party. All of the British MMCs come badged with the Pegasus and they are going to look just GREAT down on that massive battlefield created by the TWO 24" × 36" maps included with this module.