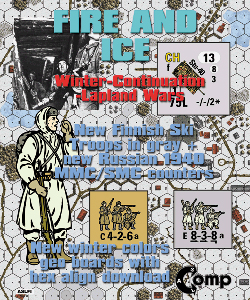 TOLVAJARVI, FINLAND, 11 December 1939: General Mannerheim himself placed Colonel Paavo Talvela in command of all Finnish troops in the threatened Tolvajarvi/Ilomantsi sector north of Lake Lagoda. In order to prevent the entire Mannerheim Line from being outflanked Talvela had to stop the Soviet advance and if at all possible push them back. Therefore, Talvela planned a strong counterattack to halt the Soviet drives in this area. However, before Talvela could launch his counterattack on the 11th, he suffered a nasty surprise on his own left flank. A Soviet battalion had marched undetected through the wilderness and fell upon his flank. Without warning the Russians burst from the woods upon Talvela’s supply line northwest of Tolvajarvi Village. There were no defensive works here and few combat troops either. By all rights the Finnish HQ staff and the support personnel should have been routed from the field but something strange happened. The first target overrun by the Russians was a field kitchen where large vats of sausage soup were simmering. After the attackers caught a whiff of the soup, the majority of them paused and began to eat. The momentum of the original attack vanished and the startled Finns received a priceless interval of time in which to recover. And recover they did. What followed was an engagement dubbed the Sausage War by the Finns that was close, brutal and without mercy. Later front line troops from the east arrived to sweep up the survivors. Many of the Soviets died by the bayonet some with sausage still on their lips.

CH led the way almost 20 years ago with its Jatkosota variant when production was cut and paste and publishers were still adhering to unmounted counters. Fast-forward two decades and prepare for the heat of FIRE AND ICE ... as well as the bitter cold of Finland's version of 'General Winter'! In this final compilation of 1939-1944 scenarios set on the Finnish Front, things have taken a turn for the colorful, as in new color die-cut counters depicting elite Ski Troops, Soviet 1940 soldiers, and Finnish vehicles and Guns—all printed on a gray counter with full-color art.