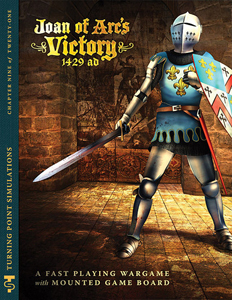 Joan of Arc's Victory: Render to the Maid! covers the entire campaign of the siege and relief of Orleans, with one-month turns beginning in April, 1429. The French player must consolidate her polyglot army and its inspiring leader, while dealing with Joan's "voices" via an events table that leaves him feeling slightly out of control. The English player has to deal with Scots and herrings and trying to resist the "help" of an unwanted Burgundian ally. Both players face the challenges of making siege and open-field combat work for them, in an era where artillery and charges by armored knights belong on the same battlefield. The game includes 200 counters, a full-color, mounted mapboard, and all the charts you will need to keep your focus on the Maid.

Joan of Arc's Victory includes a random "Joan Events" table that will render the French player a sense of the uncertainty being around someone divinely inspired might provide. And it keeps life interesting for the English too, as Joan may do something very unexpected (and have surprising combat benefits too!).

No two games will ever be alike.