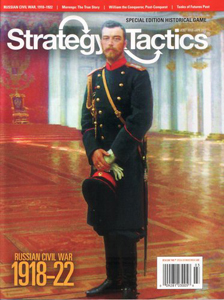 Russian Civil War, redesigned by Joseph Miranda,is a multi-player wargame of the military and political conflict of 1918-1921 that abolished the Czarist regime and created the foundation of the modern Soviet Union.

The basic game is designed for three to six players, each of whom controls one or more factions among the revolutionary, counter-revolutionary, nationalist, and interventionist forces that participated in the chaotic struggle to determine Russia’s future.

This new edition is based on the original rules, counters and map from the original 1976 SPI version, with the following added features. The map has been expanded to cover Central Asia and Mongolia. Additional units have been added to account for specialized formations, foreign interventionist and nationalist forces. Additional markers have been added to represent various special events not previously covered. The rules have also been clarified, and some modifications have been made. Several optional rules have also been added.