World at War : Into the Breach 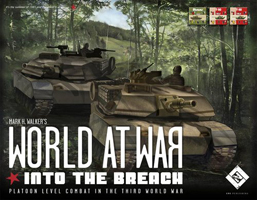 "World at War seems to have everything. There are Cubans with SU-100s, South Africans with Oliphants, French AMX B-2s, T-80s with different armor factors, and a designer who seemingly ignores logic, but there is one thing that World at War is missing. That one thing is LOTS of American tanks. Into the Breach cures that. This expansion to The Untold Stories explores the Yank’s battle on the front line in the first days of the war. Now you get to fight with lots of Abrams, Bradleys, infantry, and even Sheridans. On the flip side of the tank, you’ll fight a mass of Soviets and Polish armor.

It’s great big fun, with some great big scenarios. There are 12 of them to be exact (unless you order the upgraded version with an additional eight scenario campaign), including an East German counterattack, West Germans on defense, and Amercans defending in depth, screening main forces, attacking, and counterattacking."

In other words, this expansion for World at War: The Untold Stories adds a lot of new scenarios while adding a lot of American and Soviet units.