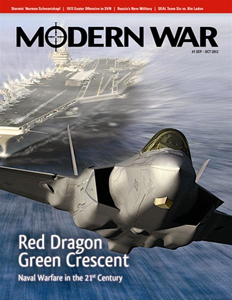 Red Dragon/Green Crescent (RDGC) is a strategic-level, intermediate-complexity wargame, with operational undertones, covering hypothetical future conflicts around the southern and eastern peripheries of Asia. The timeframe is the near future, between 2013 and 2021. The game has been designed by Bruce Costello using the CSR Award winning system that first appeared in Strategy & Tactics no. 250. It’s adaptable for two player, multi-player and solitaire play.

RDGC expands the original game into a two-mapper covering the Indian Ocean and Middle East, areas strategic to both the US and its allies and the Peoples Republic of China and its allies.

In the game, Chinese forces that may be initially deployed into the Indian Ocean area are few, but they also have one solid ally at start: Myanmar. Besides Myanmar, there are other question marks for US planners. For instance, would Pakistan stand idly by if India allied with the US, given the existential threat they perceive of a US-Indian victory in a war with China? And what about Iran: if that country is ever to make a move to achieve dominance in the Persian Gulf, what better time than during a major war while its winners aren’t yet clear? There’s also the rest of the troubled Middle East (Egypt-Syria-Lebanon-Israel). That collective totality makes for a wonderfully varied gaming situation. Besides the main scenarios, there are numerous variants and options, adding new dimensions and giving literally hundreds of new possibilities for play.

Most of the ground units in RDGC represent brigades (“brigade combat teams” or “BCT” for the US). The exceptions are the Singaporean, Malaysian, Taiwanese, Philippine, and Yemeni armies. There is additionally one new corps of marines for the PRC. Aircraft are mostly represented by mixed-type combat-wings, though only one aircraft type is shown on each counter. Long-range bombers have their own mono-type units that can’t combine operations with the other ‘tactical’ air wings. Ship units mostly represent mission-oriented groups of vessels such as SAGs, subrons or individual capital ships.

Game turns represent varied amounts of “real time,” depending on the “operation” presently being conducted, from one to three days. An entire match encompasses the first month of the wars being examined. Scenarios include partial and two-map games, some centered on the Korean peninsula, others on the Indo-Pakistan area, and others taking in the entire, huge, arcing region from the Red Sea to Alaska.