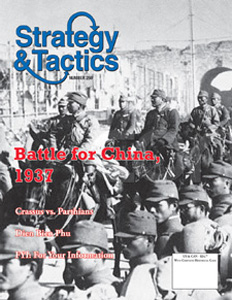 Battle for China is an intermediate-complexity wargame, designed by Brian Train, of what that people call their "War of Resistance Against Japan," specifically covering the struggle from the initial Japanese invasion in July 1937 to the end of 1941. The game is for two players, one directing the military forces acting to defend China against the Japanese, and the other commanding the forces of imperial Japan. The game can also be played with a third player taking the Chinese Communist forces.

The area map is drawn at approximately 75 miles to the inch. Units of maneuver are brigades, divisions, corps and armies. Specialist units (air, armor and artillery) are represented by abstract markers representing concentrations of those formations. There are 280 small-size iconic units. The 18 game turns are seasonal. The system is an evolution of the one found in Arriba Espana, which will have appeared in World at War number nine. Two experienced players can complete a game in about four to five hours.